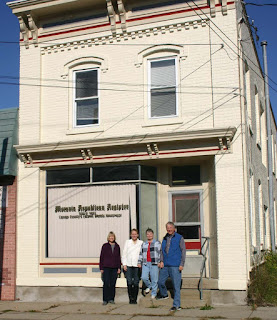 Community Newspapers is the name of the newspaper publishing business run by Bernard (Butch) McGuerty. Butch purchased the newspapers, published under the banner InterCounty Publishers, from his father, the late Bernard (Bernie) F. McGuerty, Jr. in 1979. Among the newspapers published by Community Newspapers is the Moravia Republican Register, which began in 1863 as the Cayuga Courier and transformed from the Valley Register to the Moravia Republican Register in 1906. In 2013, the Register celebrated its 150th anniversary. Butch began publishing Focus on Farming in 1979 and then Energy Dollar Saver and New York Outdoors. The Southern Cayuga Tribune is published on a quarterly basis in conjunction with the Genoa Historical Association.

Two Brothers Printing was spun off from InterCounty Publishers by Butch in partnership with his brother, Brian. Brian left the business in 1984 and Butch continues to run Two Brothers on his own.

At the present time, both Community Newspapers and Two Brothers are housed at 6 Central Street in the village. Digital presses and computers have radically transformed the printing business, expanding the options and reducing the wait time for customers. Two Brothers supplies stationary, business cards, envelopes, printed forms, brochures, programs, raffle tickets, newsletters, posters, NCR (no carbon required) forms, rubber stamps, and lamination. We will work with you to provide the product you need at a reasonable price.

Please fill out the Calendar Event Request form to get your organization's ongoing or special events listed on our Community Events Calendar. We hope to have our calendar be the main source for finding out what's going on for both Moravia-Locke area residents and visitors.